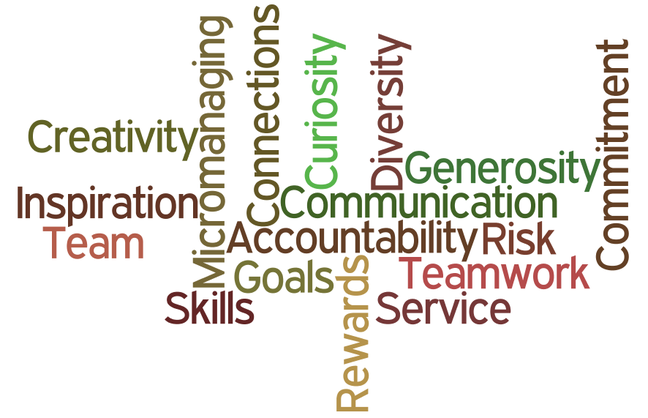 Throughout my life I have been on many teams whether it is at work, school, or extracurricular. The model my group and I created highlights many aspects that we believe help when building an effective team. Through my experience I have learned member personality, defined roles and accountability and communication are vital to forming an effective team.
My personal application actually started with a poorly managed team that turned effectively with a change in leadership. During the summer, I work at a women’s boutique and coffee show that are located in the same building owned by the same person. One summer there was a manager that had poor leadership skills. The manager would snap and start scolding you in front of customers, micromanaged all the employees, and was a very hard person to get along with. Once the owner realized how much this manager was affecting the business, the manager was dismissed. I was chosen to assume the position was was able to clear up many of the problems we often encountered with the previous manager.
I tried to bring my natural leadership personality traits into my work. I wanted to be respected as a friend and as a leader. Where the old manager was rude and moody from the moment she opened the door, I tried to greet each day as an opportunity and bring a cheery attitude to work each day. Though becoming manager was outside of my comfort zone, I tried not to become overwhelmed. If you had a problem completing a return, the old manager proceeded to chew you out for not knowing in front of the customer and take over. In contrast, I would first address the customer in a professional manner to figure out the problem, walk the employee through the steps and once the customer left, I would recap how to fix the problem with them for future reference. I consciously tried to oppose the old manager’s conscientiousness, agreeableness, and neuroticism. Just having the negative personality out of the workplace made it more enjoyable. I believe and hope the staff was closer, worked more efficiently and generally had more respect for one another once I took control.
Two of the biggest issues we experienced with the old manager was that no one knew their position and we were constantly micromanaged. I decided to change this by hanging a post assignment list in the back room where all the employees could see what position they would be working that day.  This detailed what the employees were responsible for that day.  Examples would be dressing rooms attendant, cash register, managing jewelry room, or making coffee. This organization of roles made it easier for all employees as they were no longer doubled up on simple duties while other important ones were missed. This also allowed me to have a list of who did what activities each day and hold the employees accountable when something went wrong. Once the employee assumed the position, they were in charge of it for the day. I tried very hard not to micromanage the employees, but have them use me as a resource. I would make the rounds, checking in on them once and a while, but tried not to hover. I attempted to discuss the day with each employee before they left to see if they discovered anything that could be improved upon. This also gave me a chance to discuss any issues I noticed throughout the day with their performance. I always complimented them on their performance unless drastic action needed to take place. I held these meetings in a very professional but relaxed manner to ensure that they employee didn’t feel attacked.
Communication and accountability were two things that I feel we greatly improved upon. The old system was just listening to the manager scream and complain about a problem. The only thing that was ever said was “it can’t be done like that!”. If you were not around to hear it, you would get scolded when you did it wrong the next time. I implemented a system of memos for when I came across a problem. First, I would come up with a  suitable solution myself or poll the staff. A memo would then be posted on the board that described the problem, why it occurred and the necessary steps to correct the problem. Upon reading through the memo, there was a sign off sheet that made them accountable for future actions. This board was conveniently located right were they signed their time card, so that would be the first thing they did in the morning. I also arranged for there to be monthly training meetings if necessary, to go over any new procedures and hear about the staff’s issues and come up with solutions.
My experience with the old manager made it abundantly clear how a effective a team can be when there is a good leader. Using tools such as selecting people with great personality traits, defining the roles, holding each member accountable, and having strong communication skills makes a team effective in every dynamic. I hope I made an improvement to the work environment and business.